Tuesday, June 25, 2019 is a date that staff and members of Crievewood Baptist Church in Nashville, Tennessee will long remember. On that night, Crievewood was targeted and attacked by an arsonist. Crievewood was not alone in these attacks; it was but one of several churches who fell victim over a week’s time to fire in an arson string directed specifically at churches. The young man responsible for the Crievewood fire set two more that same night before getting caught the next day.

A neighbor of Crievewood Baptist Church noticed the fire shortly after it was set, and church staff, law enforcement, and firefighters rushed to the scene. Nevertheless, the fire burned for 45 minutes before the area was secured and firefighters could safely go inside and begin to put it out. 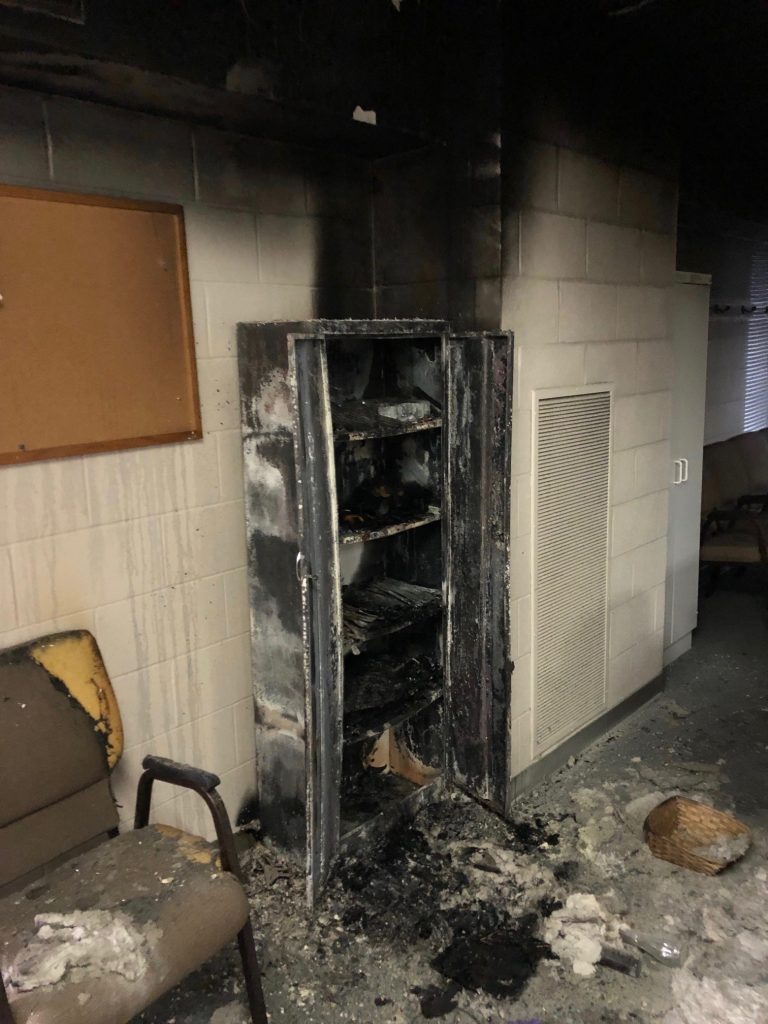 The fire was set inside this cabinet in the Sunday School room, directly underneath the sanctuary, where smoke billowed upwards for almost an hour.

First responders had spotted the arsonist while he was still in the building, so police officers had to clear the facility before anyone could enter. They had to open every single door in order to confirm that the man was gone and that it was safe for firefighters to enter. Consequently, smoke and soot permeated every room and surface. For hours, smoke billowed out of the Sunday school room, where the fire had been set – directly underneath the Sanctuary, resulting in extensive smoke damage and contamination to the church’s main building and meeting spaces.

Recently, we spoke with Associate Pastor Will Sensing about that night. He described the initial reaction to news of the fire as a “horrible shock,” and expressed understandable feelings of disbelief and sadness over the senselessness of the act. However, as we talked further about that night and all of the surrounding circumstances, his tone shifted. Most of our conversation focused on the blessings that emerged from the ashes, and Crievewood’s overwhelming sense that Jesus was caring for the church during this time.

Simply put, there is no good reason for a church to be set on fire, and there is no benefit in the deliberate destruction of a place of worship. However, there are a number of small “gifts” surrounding this fire that can only be attributed to the providence of God. In our work with churches, we seek to change lives by serving those who serve. Sometimes, we get the unique privilege of witnessing the details of God’s providential gifts in the lives of his people. Standing right in the middle of one of those small but powerful gifts from God is an honor and blessing.  Ultimately, it is why we do what we do.

Enable and Crievewood had been discussing a services relationship for about a year before Crievewood’s needs reached a point of needing our assistance. So, in June of 2019, the timing was right, and Crievewood reached out to Enable to begin formally working together.

This perfect timing turned out to be crucial to a quick recovery for the church staff’s ministry operations. On Tuesday, June 25th, Enable engineer Cody Baird oversaw day one of the Crievewood client onboarding process, which included a cabling project setting up Wi-Fi connectivity in the Family Life Center. Cody finished his work on the Wi-Fi connectivity mere hours before the arson attack occurred later that night. The Family Life Center (“FLC”,) Crievewood’s secondary building, was completely unaffected by the fire. Because Wi-Fi connectivity FLC had been established before the fire, the FLC was able to become a key component in Crievewood’s rapid recovery. 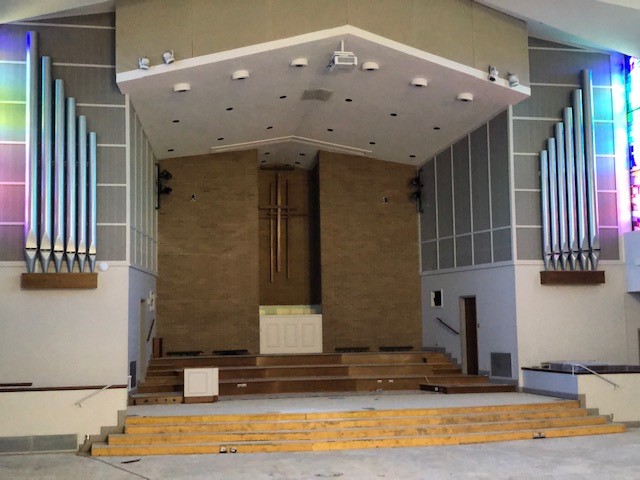 The Crievewood Baptist Church sanctuary weeks after the fire, under reconstruction.

When Cody showed up to the church on Wednesday, he had originally planned on beginning day two of a new client onboarding process. Instead, he was thrust immediately into disaster recovery mode. It took two full days of work to get the staff reconnected and to ensure that all of the church’s technology assets (like the server and other hardware) were protected. Again, the work that providentially had been completed the day before made this transition so much easier. Because of the new Wi-Fi network setup, the church staff was able to move over to the Family Life Center across the parking lot and resume ministry operations in just two days as opposed to weeks.

When Pastor Will shared about those days and weeks immediately following the fire, he said “I don’t even want to think about what our situation would have looked like if we had not begun our relationship with Enable when we did.” He views the remarkable timing of Enable’s relationship with Crievewood as a tangible example of God’s detailed protection and care in the midst of a horrible situation. 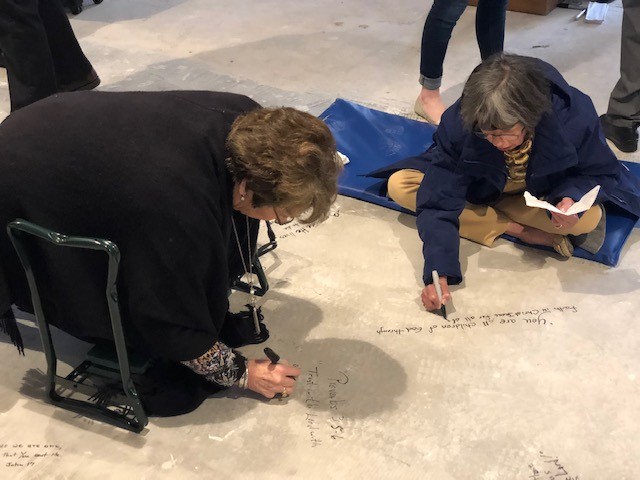 Members of the church writing verses of scripture on the foundation in the midst of recovery.

The most important blessing that came out of this entire situation is that no one was hurt. The young man who committed the arson was carrying a gun that night, and things could have gone very differently. Nobody was at the church that night, and the only damage that occurred was to replaceable material items. Crievewood’s ministry continued during and after this event. This reality reinforces a truth that we have become all too familiar with during this time of the COVID-19 pandemic and social distancing – the church is not the building. While buildings are useful and helpful, the church is made up of the people in the body of believers.

Another silver lining in the midst of this tragic event is that because the Crievewood property is comprised of separate facilities and HVAC systems, Crievewood was able to avoid damage to multiple buildings. Essentially, only the Sunday school room and the Sanctuary in the main building suffered severe smoke and soot damage. Additionally, the timing of Enable’s onboarding project was crucial to recovery from the fire. Enable started the very day of the fire, and the new Wi-Fi network in the other building ensured that nothing in the network was permanently lost or damaged. Ministry operations were resumed almost immediately, in an essentially seamless manner.

Crievewood had two main recovery goals following the fire – they wanted to be able to hold their Sunday service, just 4 days after the incident, and they wanted to be able to be open for their Preschool ministry on the following Monday. Because of the hard work of incredible teams of people including first responders, law enforcement, firefighters, Crievewood staff, and Enable team members, and because of the technology supporting the operations, Crievewood was able to achieve both objectives!

Crievewood’s story is a beautiful reminder of the power of God’s providence and His timing, even in the midst of confusing tragedies. It is a story of how He meets us in the seemingly mundane aspects of our lives (like Wi-Fi and computers), and provide for us in the little ways and the big ways. It serves as a reminder that while we cannot always see the big picture, or fully understand why bad things happen, we can choose to look for and see the small gifts. We can be encouraged by the good amidst the awful, the golden nuggets, the silver linings. The silver linings don’t make the bad things less bad, but they do give us other tangible realities to focus on. If we seek those small present realities, and if we speak about them and share them with others, we find power – the power of testimony and the power of joy in spite of the circumstances.