Our friends at Tallowood Baptist Church in Houston, TX hosted a Multicultural Worship Service at the end of the year, and it was a beautiful representation of the picture painted in Revelation 7:9:

“After this I looked, and behold,  a great multitude that no one could number,  from every nation, from all tribes and peoples and languages, standing before the throne and before the Lamb…”

In 2021, Houston was again found to be the most diverse city in the country, and Tallowood’s service merely reflected the reality of that. There are about 40 different nationalities represented in the church alone, and in the service itself, testimonies were shared and songs were sung in Telugu, Spanish, Svahelei, Burmese, and Korean.

“Last November, members of Tallowood Baptist Church joined together and witnessed the Gospel being shared in multiple cultures and languages. As a church, we experienced diversity on another level. Purposeful and transformative are two words that come to mind when trying to describe the Multicultural Sunday Worship service, but these words do not give the beauty of the service enough credit. Fellowshipping with others who do not look like me, praying in their colorful native languages, humbly brought me to my knees. 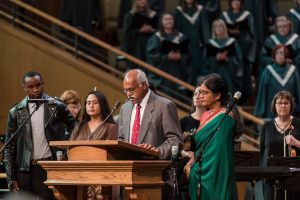 Why? Because their love for God was expressed wholeheartedly, without disruption or resorting to their second language of English. They merely poured out their hearts because they knew, just as much as we did, God heard.

We fellowshipped after the service, learning about the various cultures and sampled ethnic foods, which was not only a tasty treat but a relationship building opportunity.

During the service, we read Scriptures in different dialects, but the most impactful moment for  me was when our voices all joined together to sing Revelation Song. This was a pivotal moment in the morning, and it hit me. My burning tears could no longer stay in the confines of my eyes. We praised, listening to four different languages but weeping the same tears. And for the first time; in a long time, I witnessed unity. As a church, we were integrated; not segregated. 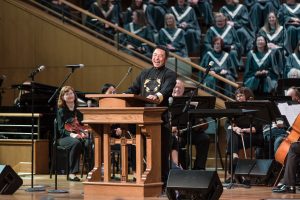 My fellow neighbors hung on the powerful words of other Christ-followers as they shared their struggles and testimonies. Prayers, petitions, and confessions fell from the lips of those who did not dine on the same meal I did that morning. And while we all look different from one another, I am reminded it does not matter. The only thing that matters is we all serve the same God, Jesus Christ.”

– A personal reflection from Carolyn M. Soto Jackson, who personally attended the service

Let this be an inspiration to you as we start a new year. How can you love your neighbors well, no matter your differences? Let’s all begin the new year with eyes open to the beauty of diversity in our world, our city, and the church.

You can watch the service below, starting at 18:28.